This the giveaway is open worldwide to those aged 18 years and above. To enter the competition, go to Aestas Book Blog’s giveaways page.

These books (see below) are available for rental. Dying to know more about the synopsis and/or reviews? Search for it at Goodreads or Amazon.

A mix of thriller, fantasy & chick literature available for rent 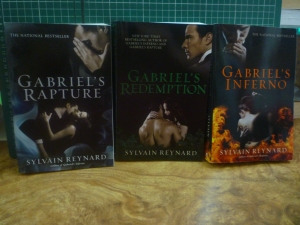 If you enjoy reading Fifty Shades series, you might enjoy Gabriel trilogy.

If any of the books caught your eye, please make your way to the store from Saturday onwards.