The Paperback Book Club is a Kuala Lumpur-based book group that meets every month. Since its first meetup in October 2011, the book club has discussed 40 books including ‘The Reluctant Fundamentalist’, ‘The Alchemist’, ‘We Need to Talk about Kevin’ and ‘The Perks of Being a Wallflower’.

The meetup for October is scheduled as follows: 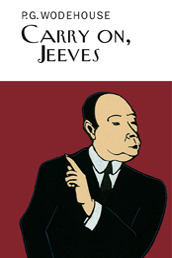 The book cover of ‘Carry on, Jeeves’

If you have not finished reading the book or are feeling rather shy, you are still welcome to take part in the meetup. RSVP at the website if you are keen to join the discussion.

There isn’t a fault in John Green’s stars. Universal has bought the movie rights to ‘Let It Snow’, a short-story collection by John Green, Maureen Johnson & Lauren Myracle.

Here is a synopsis of the book:

An ill-timed storm on Christmas Eve buries the residents of Gracetown under multiple feet of snow and causes quite a bit of chaos. One brave soul ventures out into the storm from her stranded train and sets off a chain of events that will change quite a few lives. Over the next three days one girl takes a risky shortcut with an adorable stranger, three friends set out to win a race to the Waffle House (and the hash brown spoils), and the fate of a teacup pig falls into the hands of a lovesick barista.

A trio of today’s bestselling authors – John Green, Maureen Johnson, and Lauren Myracle – bring all the magic of the holidays to life in three hilarious and charming interconnected tales of love, romance, and kisses that will steal your breath away.

This will be the third book-to-movie adaptations of John Green’s work after the success of ‘The Fault in Our Stars’ movie. ‘Paper Towns’ is expected to be shown in US cinemas on 31st of July 2015 while the release dates for ‘Looking for Alaska’ and ‘Let It Snow’ have not been set.

Lauren Myracle’s debut novel ‘Kissing Kate’ was selected as one of ALA’s “Best Books for Young Adults” in 2004. Her Internet Girls book series have catchy titles such as ‘ttyl’, ‘ttfn’, l8r, g8r’ and ‘yolo’.

For more details on the authors’ works, please visit their social media pages.

ps: SS Readers Corner has a copy of ‘Let It Snow’. If you haven’t read the book, rent a copy from our store.