Hashtag #bookadayuk is back on Twitter after a month of absence. In case you have forgotten, #bookadayuk is a Twitter campaign to discuss about books. There is a different topic of to talk about every day.

In February 2015, the hashtag is hosted by The Borough Press. If you would like to tweet your book suggestions, don’t forget to include hashtag #bookadayuk and @BoroughPress. Here is a list of topics: 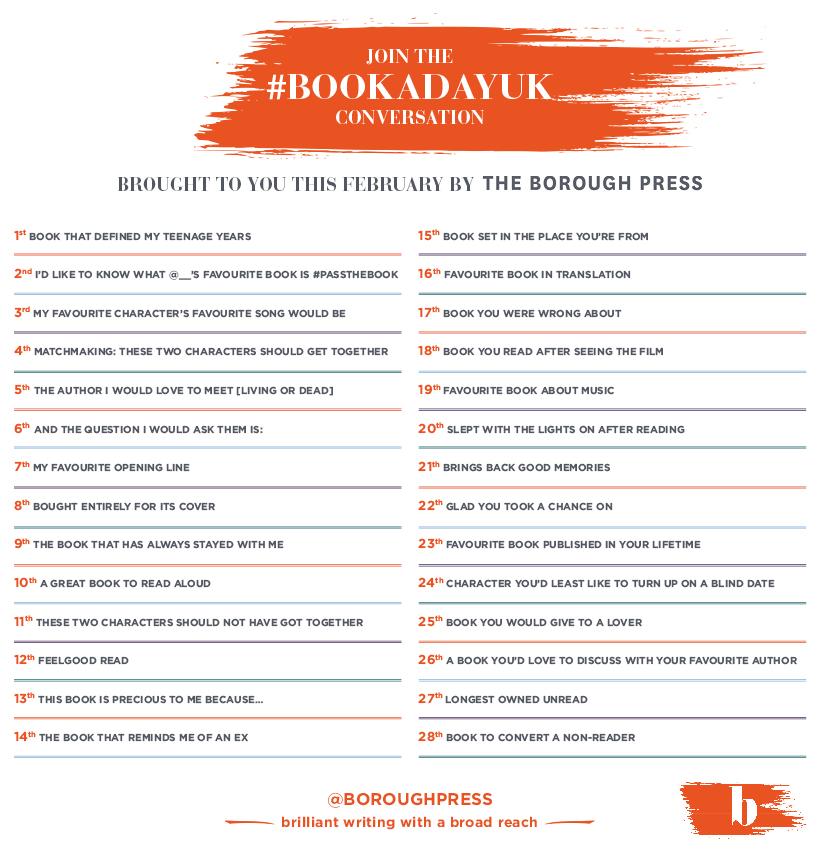 Author I'd like to meet is Harper Lee. Her book has such a big impact till this day @BoroughPress #bookadayuk

#bookadayuk is a Twitter campaign to encourage tweets about books. There is a different topic of discussion every day.

This month, the hashtag will be hosted by Bailey’s Women’s Prize for Fiction. Check out the topics below! If you would like to tweet your book suggestions, don’t forget to include hashtag #bookadayuk and @BaileysPrize. 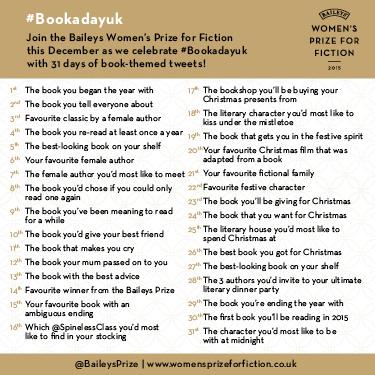 #Bookadayuk topics for the month of December

I posted this quite late so today is the 10th topic. I would give a Hello Kitty version of World Atlas to my best friend because both of us enjoy travelling. Don’t judge a book by it’s cover, the content is really educational regardless of the age of readers.

What book would you give your best friend? Share your book suggestions in the comment box below. 🙂

This World Atlas was a bargain at RM10

Hashtag #bookadayuk is a digital campaign to get Twitter users to talk about books. Everyday there is a different topic to be discussed and each month the hashtag is hosted by a different book organisation.

‘Books are My Bag‘ was the host last month. They followed the format used by its predecessor, ‘We Love This Book‘ by compiling the tweets using Storify. Every single contribution to #bookadayuk were featured in their Storify, which delighted us. Furthermore, we were extremely happy when our tweets were retweeted and favourited by the host and authors! For example, this ‘book with beautiful spine’ contribution was retweeted by Darren Shan.

On 1st of November 2014, the hosting baton is passed onto Headline Publishing Group. The topics for the month of November are featured in the image below. To tweet your book suggestions, don’t forget to include hashtag #bookadayuk and @headlinepg. 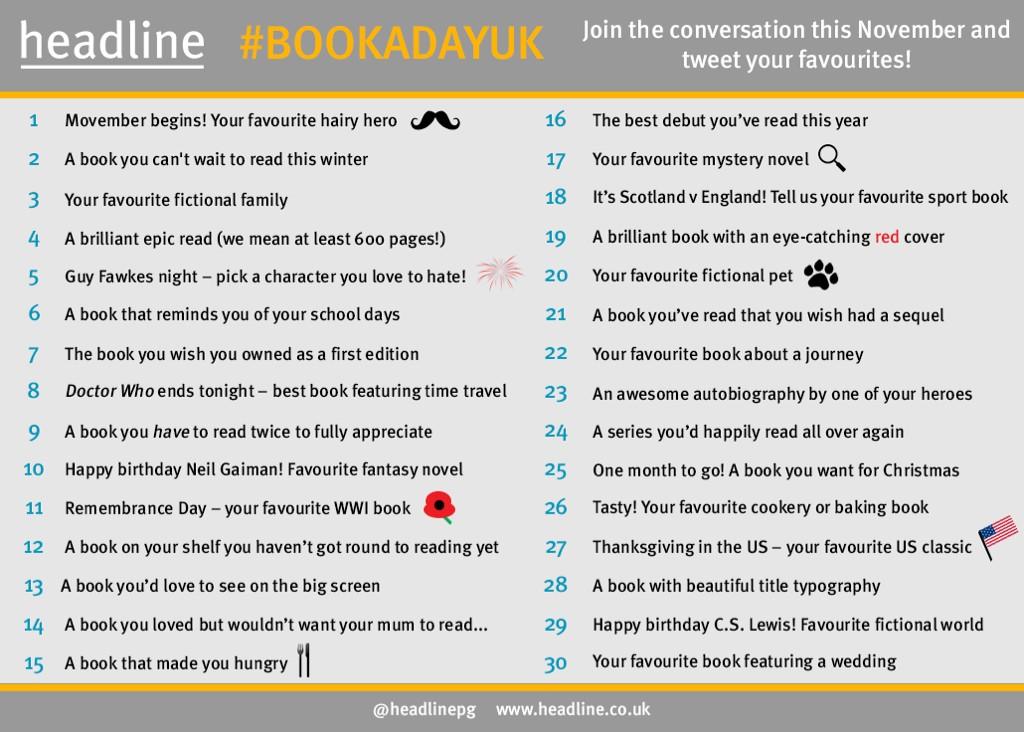 Today’s topic is favourite fictional family. Our pick is the Travis family by Lisa Kleypas because our customers love reading Ms Kleypas’s well-written romance novels. Each Travis sibling has its own book: Gage (‘Sugar Daddy’ published in 2007), Haven (‘Blue-Eyed Devil’ published in 2008) and Jack (‘Smooth Talking Stranger’ published in 2009). Our customers cannot wait for Joe Travis’s story ‘Brown-Eyed Girl’, which is expected to be published in 2015.

What is your favourite fictional family? Let us know in the comment box below.

Scholastic is collaborating with a global superstar Usher in a campaign to promote reading habit in children. There will be a live performance and special programme that will teach students ways to take informed action, become reading advocates, and help make a difference in their schools, communities, and the world.

Here are details of the programme:

I'm teaming up w/ @Scholastic to spread the joy of #reading in a live webcast for kids on 11/6! http://t.co/O4uXxb7xTW #sharepossible

If you have a Twitter account, you should search for #bookadayuk. The hashtag is basically a UK-originated digital campaign to get people talking about books. There is a topic of discussion everyday and the hashtag is hosted by different book organisation every month.

‘We Love This Book‘ arranged the topics for the month of September. I was impressed by their out-of-the-box method to present tweets from contributors. Instead of clicking on ‘Retweet’ or ‘Favourite’ button, ‘We Love This Book’ compiled and displayed their favourite book suggestions via Storify. I was elated when my suggestions for Favourite Literary Friendship, Favourite Seafaring Novel and Literary Crushes were featured there.

On the 1st of October, ‘Books Are My Bag‘ will take over the hosting duty. Check out the image below for a list of topics. If you would like to contribute ideas, don’t forget to include hashtag #bookadayuk when you tweet to @booksaremybag.

#bookadayuk topics for the month of October

Today’s topic is ‘Book to curl up in front of a fire with’. We don’t have winter in Malaysia but my favourite memory of winter is seeing snow in the backyard of my UK home (I studied there for a year). I read ‘Jane Eyre’ by Charlotte Brontë that winter. I was motivated to read the novel after watching the film starring Mia Wasikowska and Michael Fassbender. 🙂

What about you? What book do you choose when you want to curl up in front of a fire?

National Reading Campaign, a Toronto-based non-profit organization, has collaborated with CBC Books to create a campaign poster/infographic to encourage Canadians to read.

The infographic does not only highlight most important advantages, but also cites the research to support the facts.

Do you know that …

For more facts and supporting research on reading, visit this link.

Reading is Good For You (infographic)

Thank you to Born and Read and Thoughts on Books for nominating this book blog for a Leibster award. Sorry for the delay in reply. I am greatly honoured to received recognition from fellow book lovers because I never expected this blog to attract readers from all over the world. 🙂

Anyway back to the award. The Leibster award is given by bloggers to bloggers. The main aim is to help readers discover new blogs and welcome them to the blogger community. There are different set of rules (as mentioned in this link) so to avoid confusion, I’ll stick to the rules set by the nominators.

Eleven facts about myself

My questions to my nominees:

Now I would like to nominate these individuals for a Liebster award:

Thanks for reading and enjoy your day!

Disclaimer: The views and opinions expressed in this article are mine and do not necessarily reflect those of SS Readers Corner. 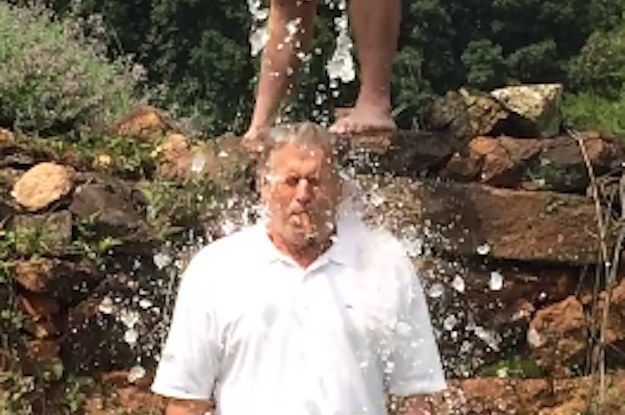 Author John Grisham had a cigar in his mouth while being dumped with ice water.

What is Amyotrophic lateral sclerosis (ALS)?

What is the ALS Ice Bucket Challenge?

What about literary world? Are there any authors who have taken up the challenge and/or have donated?

Neil Gaiman – He was challenged by his wife, Amanda Palmer whose step brother died of ALS. I like that he mentioned how the challenge works.

Sandra Boynton – She’s been a supporter of the cause ever since her sister died of the disease 10 years ago. Ms Boynton took a unique approach to the ice bucket challenge.

Stephen King – He did in honour of a friend who suffers from ALS.

John W. Quinn – author of ‘Someone Like Me: An Unlikely Story of Challenge and Triumph Over Cerebral Palsy’.

There are many more authors who have done the challenge and/or a donation. Visit YA Interrobang and Book Riot links if you’d like to find out more.

How can you help the cause?

The Ice Bucket Challenge seems like a fun thing to do. However in my humble opinion it does not do much for the illness other than telling people of its existence. Instead of pouring ice water over yourself, why don’t you donate some money to your local ASL or MND organisation? Here are some links to the organisations:

Malaysia does not have an official ASL organisation but you could contribute your time, money and/or resources to Malaysian Rare Disorders Society (MRDS). MRDS is a volunteer-run organisation that takes care of the welfare of individuals with rare disorders and their families. Visit this link to find out more information about the society.

Ever since I discovered hashtag #bookadayuk last month, I have been tweeting my answers to the book chat. It is so fun but challenging at times. Often I refer to ‘My Books’ section at Goodreads to find a suitable book to throw into the discussion. I usually post using @ssreaderscorner but when I have 2 book suggestions, I will use my personal Twitter @emberzmars. My proudest moment was when I was the earliest to answer ‘The Best Young Adult book’ tweet on 19th of August 2014.

@emberzmars Congratulations you are the very first with YA rec's (I know the time diff helps!). Some great ones tho' — TA

I am delighted to say that hashtag #bookadayuk will be continued in September. This time, it will be hosted by We Love Books on Twitter (refer to image).

To join in the fun, include hashtag #bookadayuk when you tweet your answer to @welovethisbook. Check out our entries on SS Readers Corner’s Twitter timeline on the right side of your screen. For today’s chat, our pick for ‘Favourite book about books and/or bookshop’ is ‘The Perks of Being a Wallflower’ by Stephen Chbosky. Charlie was given a list of books to read by his English teacher named Bill. I like the list and have added a few books to my own ‘To Be Read’ list.

What is your choice for ‘Favourite book about books and/or bookshop’? Feel free to share your entries in the comment box below or chat with us via Twitter.